In the last years I have focused mostly on designing wormhotels for Community Composting projects where larger groups of neighbours bring their organic waste together in a wormhotel and share the vermicompost to feed the soil of their own gardens or share the compost with community gardens in the city to grow food.

The worm hotels of Le Compostier have shown it is possible to compost in the city, even on the sidewalk in busy neighbourhoods like 'De Pijp' in Amsterdam, without causing trouble for the surrounding. The worm hotels bring neighbours together and help to green the city, making it a better and more natural place to live in.

Over the past two years I have been asked on several occasions to design a worm hotel for smaller groups. This week I have build the first Le Compostier worm hotel for 2 to 4 households.

When designing this new worm hotel I was planning to make a shallow garden box on top just like the bigger worm hotels have. But while building the prototype for this new composting furniture at my workplace at the Green Living Lab my partner Aveen Colgan (initiator and manager of the Green Living Lab) told me that a visitor of our educational garden had pointed out that we had so many birds visiting our garden, but we did not have a place where these wonderful creatures could drink.

Hearing this story the idea for the watergarden worm hotel was born. The shallow garden box was transformed into a small pond with shore plants and the worm hotel now features a drinking place where the birds can com to drink safely.

On the side of the water I have planted some elegant water plants, that will flower and attract pollinating insects and some flesh eating plants that will do well in holding the fruit flies in the worm hotel at check.

But the water also has a function. The water will help cool the furniture during the warm season and the overflow of the water garden can be used to grow plants in a vertical garden on the walls of the wormhotel.

Our cities are facing many challenges in the coming years. Feeding all the people with nutritious & healthy food might proof to be one of the most difficult ones.

Making composting easy and accessible to people in the city will help make it possible to grow food on larger scale in cities.

When we integrate composting and growing food into public spaces, where living, playing and relaxation go hand in hand, our cities become healthier and more pleasant to live in.

The proto type of the Le Compostier Watergarden Wormhotel will be shown at the Urban Innovation Festival that SPARKCampus is organising in Den Bosch (The Netherlands). 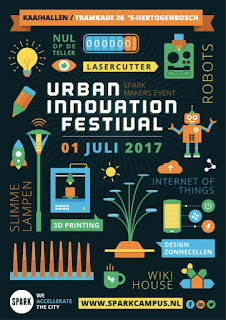