Discovering some of Amsterdams most fun & circular food initiatives on bicycle.

In a place like Amsterdam it seems so normal to have food ready for you at every corner of the streets. In the supermarkets, local shops and countless restaurants and bars of Amsterdam food is available in abundance. Or at least that is how it seems to be. That all this food comes from outside the city and is produced with many inputs & costs to the environment is not clear to many in the city.
The more so it is a pity that huge volumes of this precious food is not actually ending up on our plates but in the dumpster.
I started making the worm hotels to show it is possible to use the organic waste that is produced in the city for food production. By composting the organic waste that is not edible we can make a rich fertilizer to feed the soils.

Luckily there are many initiatives in Amsterdam that are working to show other ways and help us learn how to rescue and preserve good food and to appreciate and grow food in urban settings.

In the past years through the projects of Le Compostier I was able to meet with many great food initiatives. I thought it would be great to organise a tour to go visit these initiatives.  So yesterday I took a small group on a tour through Amsterdam on bike to visit some them.

We started at De KasKantine. The location where StadsOogst is making its Wormenpoep and Le Compostier is building the worm hotels since beginning of this year. Menno (the founder of De KasKantine) gave an introduction and explained about the mission of the place. To show we can build a real place with what is available to us in urban settings with what is thrown away. Most of the materials used at the location are recycled and De KasKantine aims to be fully selfsupporting in the midst of urban devellopment.

After a short introduction we visited some of the inititives connected to De KasKantine. StadsOogst showed some of the ways we can compost in the city and Le Compostier presented the first DIY worm hotel: The WºRM. The manual for this DIY worm hotel is now available.

We visited another member of De KasKantine and the group learned about the food that is thrown away at supermarkets and food distribution centers in town with De Voedselkringloop by founder Jaap Söntjens. For many of these corporations it is cheaper to waste then to preserve. Therefor it is really necessary that initiatives like De Voedselkringloop show another way and help safe this food.

Educating and reconnecting with nature at the Green Living Lab. 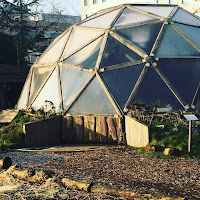 On our next stop of the tour we visited The Green Living Lab. A green oasis at the heart of the financial district of Amsterdam. The project is founded by Aveen Colgan who's mission it is to reconnect people with nature and show the value of nature for healthy living in urban settings.

One of the programmes of the GLL is the Green Student Bootcamp Challenge where university students are given the chance to discover nature and the effects of green on our health.

Le Compostier was able to develop the first worm hotels at the location of the GLL and it was fun to show the group this unique location.

Restaurant As teaches about the taste of pure food.

The first restaurant to use a worm hotel of Le Compostier is Restaurant As. The restaurant of Sander Overeinder works with respect for life and death. One thing dies to feed another. A continuous flow of life and transformation. This is shown especially by how the chefs of the restaurant care for the plants and animals that provide the restaurant with produce to cook with.

When we arrived at the restaurant the group was witness to a special natural event. A swarm of bees had left one of the beehives that are placed at the back of the restaurant. For a short while the garden was filled with bees until they all swarmed around the new queen bee.

When it was safe to enter the garden the group was invited to enjoy some yummy treats and artisan bread from the in-house bakery and some refreshing water on the terras of Restaurant As before getting on our bikes again to head to the the next location.

Amsterdam is a city of bikes & community gardens.


Amsterdam is a great city to explore on bicycle. The city is full of bike paths and using the bike is the fastest (and cheapest) way to go around the town. The group that joined the Circular Food Bike Tour enjoyed the great weather and got to meet eachother and chat while visiting the different locations.

Going by bike paths away from the main roads we got to see some of the many community gardens of Amsterdam. 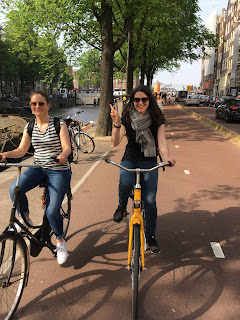 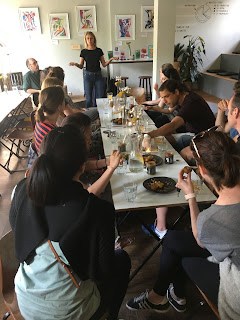 At restaurant Instock we were treated to some welcome refreshing water and yummy treats made from food rescue from that day. Veerle Tuijnman told the group about how Instock started and the succes Instock is having in making it logistically possible to rescue big volumes of products from supermarket-chain Albert Heijn and using the rescued products to offer a high standard menu in their restaurants.

Also Potverdorie shares this mission; they turn food rescue into tasty and high quality products by using traditional food preservation techniques. At Instock Joep Weerts told us about where they get their products and about the techniques they use.

Putting the art of cooking of Instock together with Poterdorie's chutneys and jams was a tasty experience for the group while listening to the food rescue stories.

One of the Community Compost projects I was fortunate to be a part of is at the heart of touristic Amsterdam. In the busy area around the red-light district tourists are not always aware of the (sometimes negative) impact their visit can have for local residents. To create more of a 'village feeling' Bernadette De Wit asked Le Compostier to make a worm hotel for the Bantammerbrug. She explained to the group what the community composting project has had for impact on the place since it has been started.

On 6 locations in Amsterdam the organisation Buurtbuik is offering dinners and lunches for free. On set times in the week each location offers a meal made by volunteers and from donated food rescue from local businesses and supermarkets.

We were offered a three course meal for free and enjoyed a great variety of dishes. While enjoying the dinner we got to meet the locals who come to Buurtbuik and it became clear that for some of the people having organisations like Buurtbuik is very important to get a warm meal. Some of the people explained they don't have enough income to eat fresh food all the time. The more the reason to rescue food where we can.

Strange to know so much food lands in the waste bin while your neighbour might not know where to get his or her next meal from.

After the tour was over I returned to my workshop at the KasKantine where the tour started. At the Bantammerbrug Bernadette had given me a bag of  Galangal Root. Somebody had left it at the worm hotel and since the roots were already sprouting I thought to give them a chance and plant them in the greenhouse of StadsOogst.

They might go well with the Pepper plants we are growing in the greenhouse for Let's Salsa's hot sauce. Who knows...