A warm home for Composting Worms in the City

Some of the community compost projects that we started over the last years took quite some time before they were realised. The new project in the east of Amsterdam took only one month.

Last week a new worm hotel popped up at a street in the east of Amsterdam. Just a few weeks before I was asked by Riny de Jonge (manager of the dep. of waste collection East) if it would be possible to show a worm hotel of Le Compostier at the opening event of the newly renovated square at the Kraaipanstraat.
Within a week a group of enthusiastic neighbours was found and the worm hotel is now already fully in use.

More and more people are hearing about the community compost projects and are happy to start using their own organic waste. Using the organic waste to make beautiful and rich worm compost to feed their own gardens. Turning waste into value for our local, circular economy.

At the moment we are building worm hotel number 12! And more requests for new community compost projects have been filed with the counsil of Amsterdam for next year.
The city of Diemen has given the green light for a first streetcomposting pilot and also the city of Amstelveen has shown interest to try out a worm hotel for an appartment building.
It's so encouraging to see the growing interest in community composting.

After the first worm hotel that was designed by Le Compostier for the Franshalsstraat in De Pijp - Amsterdam, each new worm hotel has been upgrated and improved. For this last worm hotel we got the chance from Riny de Jonge to try out some new ideas.


A warm home for Composting Worms in the City

For some time I had been walking around with the idea to include the concept of a biomeiler in the design for a worm hotel.

In the cold period of the year the composting process slows down, or comes to a still. When temperatures stay above 15 degrees Celsius the composting worms remain active, below that they process much less material. When it freezes outside, the worms could even die!

Last winter the wormhotels for streetcomposting made by Le Compostier have shown that they offer a good protection from the cold, but to keep the composting going some more warmth is wanted. For that reason this new wormhotel has a room to store woodchips during winter. When made moist the woodchips will decompose and create warmth. The warm air will spread inside the wormhotel, keeping the rest of it at a pleasent temperature for the composting worms. Even when it freezes outside!

In spring time the (partly) decomposed woodchips can be added to the garden on top of the worm hotel as mulch, or added to the nitrogen-rich organic waste to improve nitrogen-carbon ratio inside the wormhotel.

The vermicompost made in the worm hotels on the street is of a good quality. Some months ago we tested the compost on request of the city of Amsterdam. The tests were done by René Jochems from the company Groeibalans. The tests showed the streetcompost had a good quality, but giving more time and air after harvesting the compost would improve the quality even more.

Most participants in the city won't have a dark and dry space at home to store the compost in a way to do this correctly. Therefor the new communityComposter holds two crates to store the harvested worm compost for curing. Giving it more oxygen and time to finish and be ready for use!

When the woodchips have been removed from the worm hotel in springtime, the harvested vermicompost can be cured in these crates. Storing the compost in the crates also helps to remove any remaining composting worms from the compost. They simply move themselves back into the other rooms inside the worm hotel!

StadsOogst Compost for the garden


For the first time we could fill the garden on top of our worm hotel with some soil we actually had made ourselves!

The soil was made with our Urban Compost that we produce in our coöp StadsOogst Compost Coöperatie.

The substrate from the mushroom farm of Wouter & Marijke is composted en it was a great feeling to use it for this project. 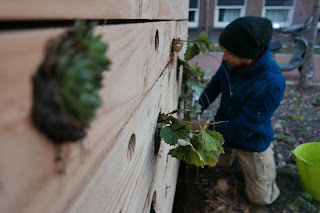 As an extra feature we added a vertical garden to this design. As experiment part of the hollow space in the backwall of the worm hotel was filled with mushroom-inoculated straw that we got from Mycophilia. 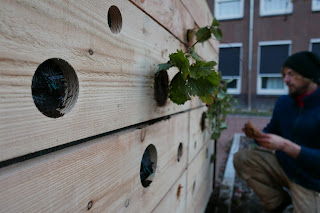 The Oyster mushrooms could be very happy under the hanging leaves of the strawberry plants and other hanging plants. 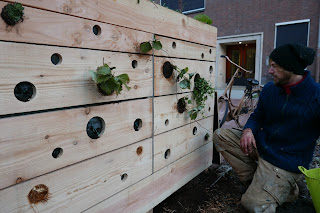 The layer of soil inside the vertical garden adds to the insulation of the worm hotel. This helps to keep the temperature high enough in cold times, and cool enough in summer.

When the leaves grow they will offer shade to the backwall, helping to retain moist inside the wormhotel when it is hot in summer. 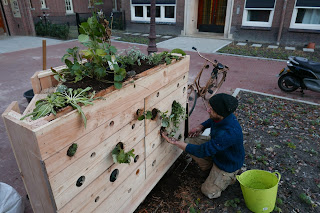 The plants used in the worm hotel each have a function. Some are helpfull for the composting process, such as Comfrey.

Others are edible. We planted Strawberry, Blackberry and even some Saffron.

Some Lavender was planted since it is said that fruitflies dont like the smell of it.

Some ground covering plants were added to protect the soil and give less space to weeds.

We are looking forward to see the fully green Worm Hotel in Springtime!