The WºRM: A home for nature in the city

Natural life in the Worm Hotel.

Inside the Worm Hotel ('Wormenhotel' in Dutch) something wonderful happens. Millions of organisms life together and transform what we consider as waste into healthy new soil: living soil. The leftovers from vegetables, fruit and other plant based materials are broken down and turned into humus.

In the worm hotel is room for many organisms. Composting worms play an important role, adding fertility to the compost with their 'wormenpoep' (vermi castings) that is full of beneficial micro organisms. The worms feed on the micro organisms and actually breed them inside their bodies. After digesting organic material containing micro organisms and excreting the castings the colony of bacteria and fungi will increase since the worms breed more then they digest.

Worms give their name to the worm hotel, but they certainly don't life in it on their own.

Woodlice (Pissebedden in Dutch) are also a common resident in the worm hotel. Woodlice are very important for the breaking down of dead wood and other organic material. Another benefit of woodlice in the worm hotel is that they change their skins when they grow. The woodlice have an exoskeleton. This hard shell does not grow when the animal grows so they have to change into a new skin when growing. The old shell is left behind and is broken down in the composting material.
Exoskeletons of insects and woodlice contain chitin. This compound can only be broken down by specific enzymes. The worms contain these enzymes in their digestive tract and increase the production of this enzyme when the digested material contains chitin. This enzyme will also be excreted with the worm castings.
I have been told that, when using vermicompost containing this enzyme it will make plants more resistent to attacks of plant eating insects. The plant will 'taste' of the enzyme and insects will leave the plants alone. If this is true I am not sure, I have not found a research yet stating this, but I am very curious about trying it out. In any case it sounds applaudable to me.

Fruit flies are also a common (but less welcomed) guest in the worm hotels. When their numbers get too big, they can be quite a nuisance. However, they are also composting agents and help transform organic material into rich soil. The key is to look for a balance in moisture and feeding speed (amount of foodwaste fed to the worm hotel), to keep the population of fruit flies in check.

Spiders will join the worm hotel family at some point and will hunt on the flies and other small organisms. They play a role in keeping organisms in check.

Mites are small to very small organisms that also play an important role in the soil. In the worm hotel different kinds of mites can be found. The mites feed themselves with organic material, with springtales, larvae of insects or other mites and some even eat worms. The mites are important for healthy soil.

Springtales are among the oldest animals around us. They can be found by the thousands in a square meter of soil. The larvae of springtales are a common resident and can easily be seen in the worm hotel. They are white oval shaped animals. Springtales digest organic material and help to create humus.

Ants are living on our planet in huge numbers. In number and even in total mass they outnumber us humans. Ants are helping your garden by cleaning it from dead organic matter and insects. But they can take over the worm hotel if they find it a cozy home. In general you do not wish for ants to nest in the worm hotel, and if you find a nest it might be a good idea to mix things around. I have not found proof that the ants harm the worms, but I can imagine they don't allow worms (and other organisms) in their nests and if the nest grows big there will be less space inside the worm hotel for the other residents.

There are many other organisms that can be found in the worm hotel and I belief that the more complex the eco-system is, the more alive the soil will be that is created.

Whenever one organism finds an environment in which it can thrive it will florish. And this can result in a 'plague'.

For instance the fruit flies we mentioned earlier can multiply in such numbers that you are welcomed by clouds of flies that leave when the worm hotel is opened. Only to return to the inside of the furniture after some time.

When your worm hotel eco system seems to be out of balance it helps to stop feeding the worm hotel for some time and add extra dry bedding material on top and nature do its tricks to rebalance the system. For instance, when too many fruit flies are in the worm hotel, there will be big numbers of fruit fly larvae. Organisms that feed on the larvae will start to grow in population and bring the number of fruit flies down.

We humans tend to look at 'a problem' and look for 'a solution' to 'fix it'. When we understand there is not one problem, but that it is part of a changing process with many players involved that work together (or against each other) to create a balanced eco-system, we can build understanding and appreciation for this process and use it to our mutual benefit.

I belief it is important that we learn again to life with nature and allow these moments of unbalance to occur for the eco system to grow stronger and more complex. It will imply that we ourselves will encounter some discomfort some moments and need to observe and learn what needs to be done to help the system to be more balanced. We need to work with nature, not against it, if we want to re-establish a more healthy way of living on this planet.

If you are reading this article my guess is that you consider yourself a human beeing. One single organism of the species Homo Sapiens. But if you look at yourself closely you will find that your body exists of many (uncountable) cells and organisms that have decide to work together and 'be' your body together. So already on an 'individual' level you are part of an eco-system.

In the human world we tend to look at our environment for our own advantage or for things we need to protect ourselves from. Even now in a time of 'climate change' and potential world wide catastrophe the general concern is what 'harm' could happen to 'me' and 'us'.

I belief that when we understand we are not apart from our environment, but that all is connected, and at some level really is all one, that we can start to make better choices then the selfish ones we make now. We need to care for all, as if it is for ourselves.

That means giving space in our midst to plants and animals. Even if we think they are not profitable or directly beneficial to us. They are part of the whole and just as important.

Words as 'plaque' or 'pests' and 'pest control' are words we need to abandon. Just as words like 'waste' and 'waste management' they hold us in a mindset that keeps us apart from our true nature.

Worm hotel projects help reconnect with nature in the city.

I started designing worm hotels in 2012 because I wanted to learn myself about the natural cycles and help re-establish the connection with nature in the city. I am still learning and feel grateful for all the support I have been given by people all around the globe.

At this moment I am looking for ways to share the experience I have been able to collect so more people can start using worm hotels and learn about healthy soil in the city.

Over the past year I have been placing a number of worm hotels at restaurants and offices. It is great to see that also amongst food professionals the interest in reconnecting with nature is growing.

Right now I am in Oslo start a first worm hotel pilot here in Norway together with Nabolagshager Oslo.

If you like to learn about our worm hotels and see possibilities to start a project in your own town, please feel free to write us at: info@compostier.nl 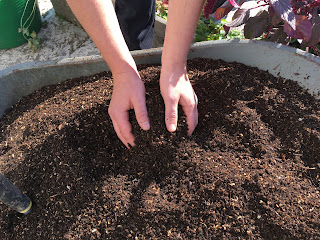